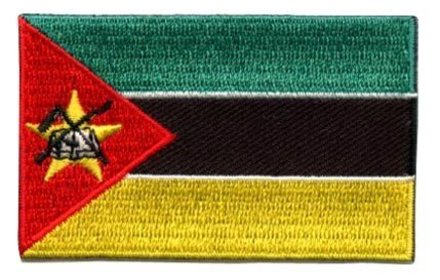 The flag of Mozambique consists of three equal width horizontal stripes - the top stripe is green; the middle one black; and the bottom stripe is yellow. The black stripe is bordered above and below by a thin white stripe. On the left side of the Mozambique flag is a red horizontal triangle pointing towards the flag's center. In the center of triangle is a yellow, five-point star which has a part of the country's coat of arms in it. The emblem consists of a rifle and a hoe crossed over an open book.

Interesting facts: The flag of Mozambique is the only one in the world to feature a rifle, as it has an AK47 on it. A contest was held to design a new flag of Mozambique in September 1999 and 119 entries were received. A winner was picked, but a new Mozambique flag has never materialized (source: worldflags101).