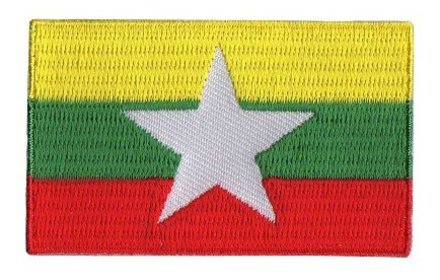 The flag of Myanmar, formerly Burma, consists of a red background with a blue square in the top left corner. Inside the square is a white emblem. The emblem consists of a cog wheel and a paddy ear surrounded with 14, five-pointed stars.

Meaning: The Blue represents peace and endurance. The red symbolizes courage and gallantry, and the white stands for purity and honor. Together, the cogwheel and ears of rice represent the country's industry and agriculture, as well as the union of the workers and the peasant class. The 14 stars above the 14 cogs represent the 14 states that form the Union of Myanmar.

History: The Myanmar flag was adopted on January 3, 1974, the same year Burma became the Socialist Republic of the Burmese Federation. Since then the state has changed its name, but not its flag. Myanmar adopted the basic design of its national flag after gaining independence from Britain on January 4, 1948. The original Myanmar flag had a red base and a blue square with a large white star surrounded by five smaller stars. The stars were replaced with the current emblem in 1974.

Interesting Facts: The country of Myanmar has changed its name twice since the adoption of the current flag, but never changed its flag (source: worldflags101).