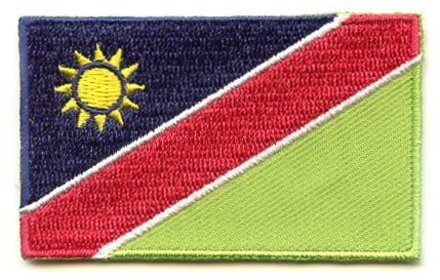 The flag of Namibia consists of three diagonal stripes - the top stripe is blue; the middle is red; and the bottom stripe is green. The blue and green stripes are of equal size. The red stripe in the middle is bordered on the top and bottom by a thin white stripe. In the top blue stripe there is a golden sun with 12 straight rays.

Meaning: The chairman of Namibia's National Symbols Sub-committee described the Namibia flag as follows: Red - represents Namibia's most important resource, its people. It refers to their heroism and their determination to build a future of equal opportunity for all; White - refers to peace and unity Green - symbolizes vegetation and agricultural resources. Blue - represents the clear Namibian sky and the Atlantic Ocean, the country's precious water resources and rain; and the golden-yellow sun represents life and energy.

History: The Namibian flag was adopted on March 21, 1990 when Namibia, then known as South West Africa, gained independence from South Africa. The flag's main colors are the same as the 1971 flag of SWAPO (South West African People's Organization), the most important liberation movement. That flag consists of horizontal stripes of blue-red-green, the most important colors of the Ovambos, the largest ethnic population in Namibia.

Interesting Facts: The Namibian flag was chosen by a committee which had been set up to provide technical advice on new national symbols. The public was requested to enter designs and 835 of them were sent in (source: worldflags101).