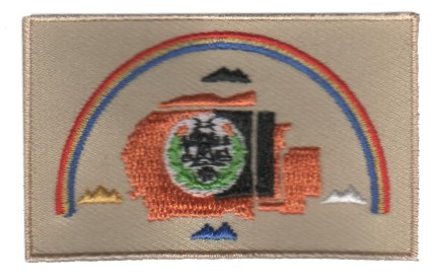 On May 21, 1968, the flag was adopted for the Navajo Nation, an Indian reservation in the Southwestern United States. This flag was designed by Jay R. Degroat, a student from Mariano Lake, New Mexico and was initially selected from 140 entries for the Navajo Flag Competition. It incorporates elements of the tribal seal designed by John Claw, Jr. adopted earlier, on 18 January 1952.

On a pale buff, tan, or copper field (sources differ), four sacred mountains of four different colors (black, white, turquoise, and yellow from the Navajo creation myth) surround the center element of the flag, a map of the Navajo Nation with a white disk in the center that features the Navajo tribal seal. The overall flag recalls sand painting, an art form used by the Navajos. A rainbow symbolizing Navajo sovereignty appears over the main design.

In 1995 the Navajo flag became the first Native American tribal flag in space when Bernard Harris carried it aboard the space shuttle Discovery. (source: wikipedia)