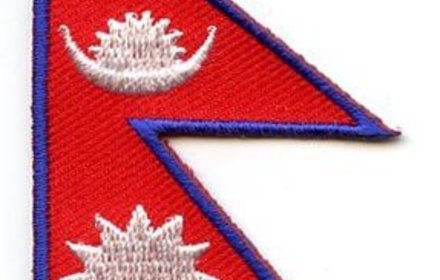 Meaning: The crimson/red color is a traditional Nepalese color and the blue outlined edge represents the country's peaceful nature. The two triangular portions of the Nepalese flag represent the Himalayan Mountains and the two main religions of the nation - which are Buddhism and Hinduism. The moon and sun originally represented the royal family and the prime minister's family, the Rana family. They also represent the country's desire to live as long as the sun and moon.

History: The current Nepalese flag was adopted on December 12, 1962. The individual flags that make up the national flag had been used during the past two centuries and the double flag has been in use since the 19th century.

Interesting Facts: The flag of Nepal is the only non-rectangular national flag in the world. It's believed the flag originated in the late 19th century from two triangular flags that were placed one above the other (source: worldflags101).