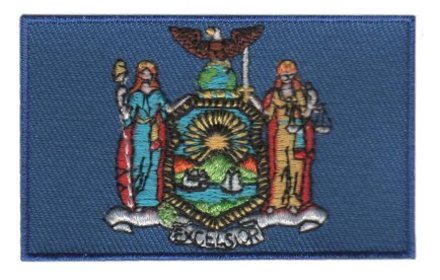 The flag of New York consists of a blue base with the state coat of arms in the center.

Meaning:
The state shield has two ships sailing on the Hudson River, which represents commerce. The shield is supported Liberty on one side, who has the Phrygian or liberty cap on her staff and a crown at her feet; representing the diminishing control of the British monarchy.

On the other side of the shield is blindfolded Justice holding the scales of justice in one hand and an upturned sword in the other. Liberty and Justice are standing on a scroll with the state motto on it: Excelsior, which means Ever Upward. Above the shield is a globe of the world, highlighting North America, and a bald eagle which is the national symbol of the USA.

History: The current design of the flag was adopted on Apr. 2, 1901 and was originally based on a Revolutionary War flag. The coat of arms originated in 1777 and has been modified five times, the last time in 1882. New York is the 11th state of the union, gaining statehood on July 26, 1788. It is one of the original 13 colonies that united to form the union of the United States.