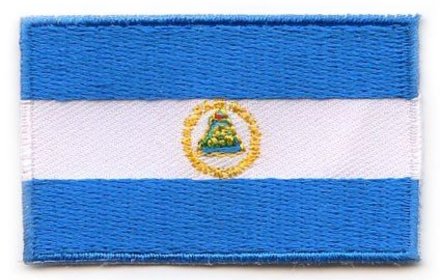 The flag of Nicaragua consists of three horizontal stripes - the top and bottom stripe are blue and the middle stripe is white. Inside the center of the white stripe, and at the center of the flag, is the country's coat of arms.

Meaning: The colors of the Nicaraguan flag originate from the flag of the former federation of the United Provinces of Central America. The two blue stripes represented the Pacific Ocean and Caribbean Sea; while white symbolizes peace. A modern interpretation indicates that the color blue symbolizes justice and loyalty; while the color white represents virtue and purity. The coat of arms features an equilateral triangle which represents equality. Inside the triangle are five volcanoes, which represent the five members of the federation. The triangle also contains symbols of liberty and peace - represented by a red Phrygian cap, white rays and rainbow.

History: The Nicaraguan flag was adopted on August 27, 1971. Nicaragua gained independence from Spain in 1821 and joined the United Provinces of Central America but by 1838, the federation began to dissolve and Nicaragua left to become an independent state. Nicaragua still used the blue-white-blue flag until 1854. The flag was re-instated in 1908 with the inclusion of the state coat of arms.

Interesting Facts: The blue-white-blue pattern of the Nicaraguan flag is common to all of the Central American countries. It is a reminder of the United Provinces of Central America. Each of the five member countries found a way to differentiate its flag - for example Costa Rica put a red stripe in the middle, Nicaragua and El Salvador put their coats of arms on their flags, Honduras used five stars, and Guatemala turned the stripes vertically. All of the countries gained independence from Spain together on September 15, 1821 (source: worldflags101).