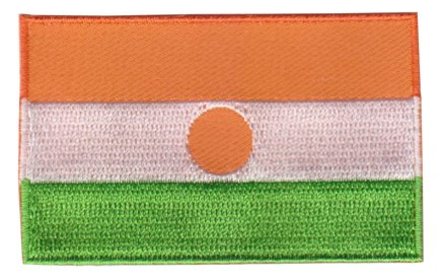 The flag of Niger consists of three equal sized horizontal stripes - the top stripe is orange; the middle one white; and the bottom one is green. In the middle of the white stripe, and at the flag's center, is an orange circle.

Meaning: The orange symbolizes the Sahara Desert, which covers more than half of the country of Niger. White stands for purity and innocence and the green stands for the River Niger, and the lush vegetation and fertile agricultural areas of the country. The orange circle represents the sun and also the readiness of Niger to defend its freedom.

History: The Niger flag was adopted on November 23, 1959. Niger gained independence from France on August 3, 1960.

Interesting Facts: The neighboring Ivory Coast flies a flag similar to Niger's, except the stripes are vertical. Both Niger and Ivory Coast were French possessions and were closely linked economically. (source: worldflags101)