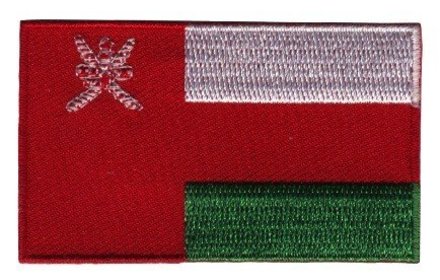 History: The Oman flag was adopted on November 18, 1995, after modifications were made to the Oman flag of 1970. A coup d'etat by the son of the ruling Sultan in 1970 resulted in a name change from the Sultanate of Muscat and Oman. At this time, white and green horizontal stripes and the country's emblem were added to Oman's previous entirely red flag.

Interesting Facts: The proportions of the Oman flag were changed from 2:3 to 1:2. The basic appearance of the flag remained the same except that the horizontal stripes are now equal in width. (source: worldflags101)