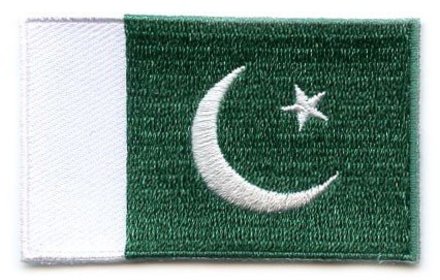 The flag of Pakistan consists of a dark green background with a white vertical stripe on the left side of it. In the center of the green base lie a white crescent and a five-pointed white star.

Meaning: Green is a traditional Islamic color and the crescent and star are also Islamic symbols. The white stripe represents the non-Muslim, minority, religious groups in Pakistan. According to modern meaning, the green represents prosperity; white symbolizes peace; the white crescent represents progress; and the white star represents light and knowledge.

History: The Pakistan flag was adopted on August 14, 1947 when the country was formed after the British-ruled Indian sub-continent was divided into two independent states, Pakistan and India. The Pakistan flag is based on one created in 1906; which represented the All-Indian Muslim League - a political organization established to represent the political rights of Muslims in India. That flag had an entirely green base with a white crescent and star in the centre. The flag remained the same when Pakistan produced its first constitution in 1956 and officially became the Islamic Republic of Pakistan. In December 1971, the province of East Pakistan left and became Bangladesh.

Interesting Facts: A common name for the Pakistani flag is 'subz hilali parcham' which is Urdu for 'green flag with the crescent' (source: worldflags101).