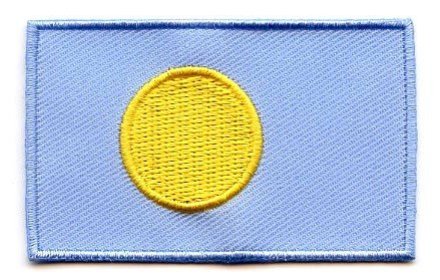 The flag of Palau consists of a sky blue base with a yellow circle situated towards the left side of the flag.

Meaning: The blue base symbolizes the political maturity of Palau, and its journey from foreign control to independence. The yellow circle represents the moon, a sign of national unity and, according to Palauan belief, represents the best time for traditional activities, such as fishing, harvesting, planting and festivals.

History: The Palau flag was adopted on January 1, 1981. Palau gained independence from the United States Trust Territory of the Pacific Islands on October 1, 1994. In 1993, Palau entered into a Compact of Free Association with the United States, which provided the nation with economic and defense assistance.

Interesting Facts: The Palau National Flag was based on the winning entrant by Mr. Blau Skebong in a 1979 flag competition (source: worldflags101).