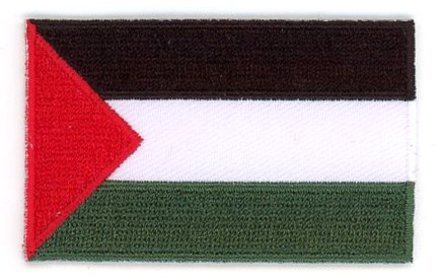 The Palestinian flag is a tricolor of three equal horizontal stripes (black, white, and green from top to bottom) overlaid by a red triangle issuing from the hoist. This flag is derived from the Pan-Arab colors and it is used to represent the State of Palestine and the Palestinian people.

The flag is almost identical to that of the Hashemite Kingdom of Hejaz and the Arab Socialist Ba'ath Party (both use a 2:3 ratio as opposed to the Palestine's 1:2) as well as the short-lived Arab Federation of Iraq and Jordan (which had an equilateral triangle at the hoist). It is also very similar to the Flag of Jordan and Flag of Western Sahara, all of which draw their inspiration from the Arab Revolt against Ottoman rule (1916–1918). The flag of the Arab Revolt had the same graphic form, but the colours were arranged differently (white on the bottom, rather than in the middle). (source: wikipedia)