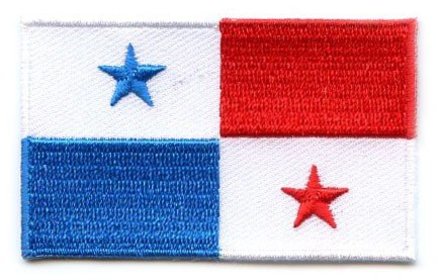 Meaning: The Panamanian flag's colors represent the two political parties of Panama, the Liberals (red) and the Conservatives (blue). The white symbolizes peace between them and the equal division of the colors states that they both govern the country at different times. The colors of the Panamanian flag also have alternative meanings. The blue represents the Pacific Ocean and Caribbean Sea and red stands for the blood spilt for Panama's independence. The blue star represents the civic virtues of purity and honesty and the red star symbolizes the authority of the law. Together they represent loyalty and resilience.

History: The current Panamanian flag was adopted on December 20, 1903, and provisionally approved in 1904 by the Constituent Assembly. It was not definitely approved until 1925. Panama was a colony of Spain from the 16th century until 1821, when independence was achieved. After independence from Spain, Panama joined Colombia as one of its provinces. Panama gained independence from Colombia on Nov. 3, 1903, with encouragement and military support from the United States. The U.S. then acquired permission to build the Panama Canal and paid $10 million U.S. and an annual fee of $250 000 per year. The Panama Canal, the land it is built on and the area surrounding it is leased to the U.S. and comes under direct United States control.