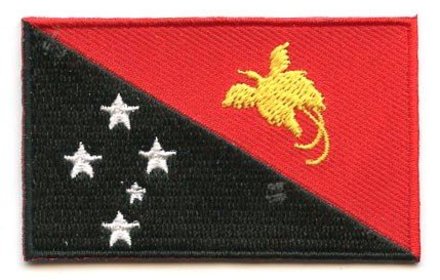 The flag of Papua New Guinea consists of two diagonal triangular sections - the left section is black and the right section is red. Five, five-pointed, white stars representing the Southern Cross are in the black portion of the flag; while a yellow bird of paradise is in the red section.

Meaning: Black, red and yellow are traditional colors which are found in Papua New Guinean art and clothing. The yellow bird, a stylized bird of paradise, is culturally significant to Papua New Guineans and in full flight it represents freedom and the country's birth as an independent nation. The five stars symbolize the constellation the Southern Cross, representing the stars Alpha, Beta, Gamma, Delta and Epsilon, which is smaller because it doesn't shine as brightly as the other stars. The Southern Cross represents the country's geographical position in the world and its link to Australia, which also incorporates the Southern Cross on its flag.

Interesting Facts: The proportions of 3:4 make the Papua New Guinea flag almost square in shape. A competition was held to design a flag for country in 1971. The government approved a design submitted by local art teacher, Susan Karike. It became the national flag upon Papua New Guinea's independence (source: worldflags101).