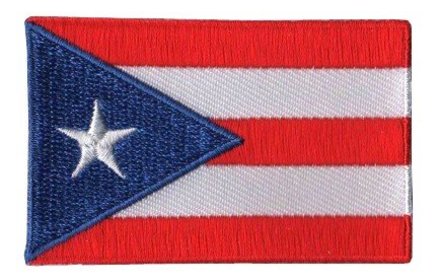 The origins of the current flag of Puerto Rico, adopted by the Commonwealth of Puerto Rico in 1952, can be traced to 1868, when the first Puerto Rican flag, "The Revolutionary Flag of Lares", was conceived by Dr. Ramón Emeterio Betances and embroidered by Mariana "Brazos de Oro" Bracetti. This flag was used in the short lived Puerto Rican revolt against Spanish rule in the island, known as "El Grito de Lares".

Juan de Mata Terreforte, an exiled veteran of "El Grito de Lares" and Vice-President of Puerto Rican Revolutionary Committee, in New York City, adopted the Flag of Lares as the flag of Puerto Rico until 1892, when the current design, modeled after the Cuban flag, was unveiled and adopted by the committee. The new flag, which consisted of five equal horizontal bands of red (top and bottom) alternating with white; a blue isosceles triangle based on the hoist side bears a large, white, five-pointed star in the center, was first flown in Puerto Rico on March 24, 1897, during the "Intentona de Yauco" revolt. The use and display of the Puerto Rican flag was outlawed and the only flags permitted to be flown in Puerto Rico were the Spanish flag (1492 to 1898) and the flag of the United States (1898 to 1952).

In 1952, the Commonwealth of Puerto Rico adopted the same flag design, which was unveiled in 1892 by the Puerto Rican Revolutionary Committee, as its official standard without specifying the tones of colors to be used. The color of the triangle that was used by the administration of Luis Muñoz Marín was the dark blue that is used in the flag of the United States, instead of the original light blue, thus creating a political controversy which has lasted throughout the years. In 1995, the government of Puerto Rico, issued a regulation in regard to the use of the Puerto Rican flag titled: "Reglamento sobre el Uso en Puerto Rico de la Bandera del Estado Libre Asociado de Puerto Rico" in which the government specifies the colors to be used but, does not specify any official color tones or shades. Therefore, it is not uncommon to see the Flag of Puerto Rico with different shades of blue displayed in the island. Several Puerto Rican flags were aboard the Space Shuttle Discovery during its flight into outer space on March 15, 2009.

Each of the 78 municipalities of Puerto Rico have adopted flags which represent the region and its people. Most of the designs of these flags derive their symbolism from the regions Coat of Arms. Most of the political parties in Puerto Rico also have their own flags, which represent and symbolize the political ideals of its members. These flags are usually displayed in public during rallies, meetings, or parades in show of political strength and unity. Various sports associations in Puerto Rico have adopted flags which represent them and which are also used during competitions and sports events (source: Wikipedia).