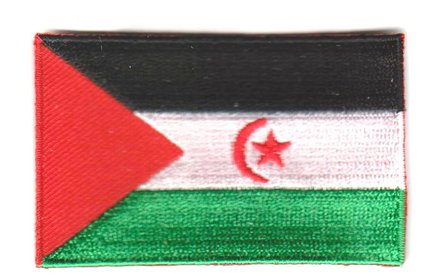 The Flag of Western Sahara is used in any area controlled by the Sahrawi Arab Democratic Republic, consisting of a black, white and green horizontal tricolor charged with a red star and crescent in the center stripe and a red triangle at the hoist. It is used on Polisario-controlled areas, while the Moroccan flag is used on the rest of the occupied territory. The flag is a tricolor of three equal horizontal stripes (black, white, and green from top to bottom) overlaid by a red triangle issuing from the hoist. These are the Pan-Arab colors. There is a red star and crescent in the middle stripe. (source: wikipedia)