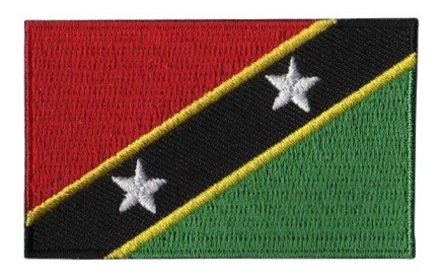 The flag of St. Kitts and Nevis consists of three diagonal stripes. The top stripe is green and the bottom stripe is red, and they are of equal size. In the middle of the flag there is a black stripe that is bordered on the top and bottom by a thin yellow stripe. Situated in the black stripe are two, white, five-pointed stars.

Meaning: The green stripe represents agriculture and fertility of the country. The red stripe represents the nation's difficulty in trying to end slavery and colonialism and to achieve independence. The black represents the African heritage of the islands and yellow stands for the consistent sunshine in the Caribbean. The stars represent the islands of St. Kitts and Nevis and symbolize their liberty and hope.

History: The flag of St. Kitts and Nevis was adopted on September 19, 1983 when the country received independence from Britain. The country is also known as St. Christopher.

Interesting Facts: The flag of St. Kitts and Nevis is based on a design submitted by local teacher Edrice Lewis in a national flag competition. (source: worldflags101)