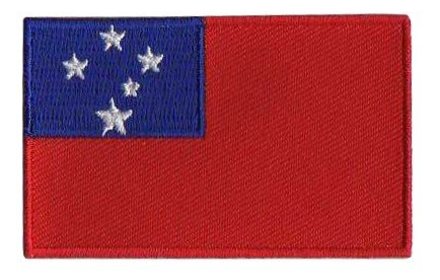 The flag of Samoa consists of a red base with a blue square in the top left corner. There are five white, five-pointed stars on the blue representing the constellation the Southern Cross, which is a prominent constellation of the southern hemisphere.

Meaning: The red base represents courage. The blue stands for freedom and the white represents purity. The five stars symbolize the constellation the Southern Cross, representing the stars Alpha, Beta, Gamma, Delta and Epsilon, which is smaller because it doesn't shine as brightly as the other stars in the constellation. The cross represents Samoa's geographical position in the world and its link to New Zealand, which also incorporates the Southern Cross on its national flag.

History: The Samoan flag was adopted on February 24, 1949, while Samoa was still a trust territory of New Zealand. Samoa gained independence from New Zealand on January 1, 1962. The basic design of the Samoan flag was created in 1948. That flag was identical to the current flag except the Southern Cross star pattern had only four stars. The fifth star was added in February of 1949.

Interesting Facts: The Island changed its name from Western Samoa to the Independent state of Samoa in 1997, but the flag remained the same (source: worldflags101).