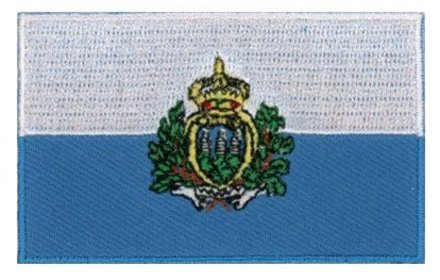 The flag of San Marino consists of two equal sized horizontal stripes - the top stripe is white and the bottom one is blue. The country's coat of arms is placed in the center of the flag. The San Marino coat of arms consists of a shield featuring three towers on three peaks which are flanked by a wreath. There is also a crown and a scroll which reads 'Libertas' (Liberty).

Meaning: The blue stripe represents the sky and the white symbolizes the clouds around the mountains and the snow that caps Mt. Titano.

History: The San Marino flag was adopted on April 6, 1862, making it one of the world's oldest flags. The blue and white colors originate from a coat of arms from as far back as the 14th century.

Interesting Facts: San Marino claims to be the world's oldest republic still in existence as it was founded in A.D. 301. San Marino also has a civil flag that is seen frequently throughout the world. It is the same as the national flag, but without the coat of arms on it (source: worldflag101).