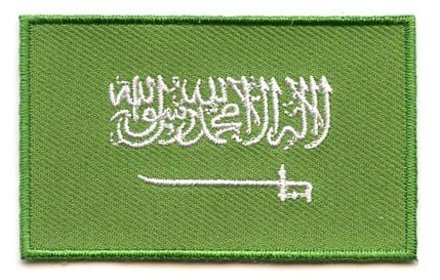 The flag of Saudi Arabia consists of a green base with white Arabic text called the Sahada written on the center of it. Below the text is a white sword pointing towards the left.

Meaning: Green is a traditional Islamic color which is linked to the prophet Mohammad who founded Islam and to the Fatimid dynasty. The white text, called the Shahada, is the Muslim Statement of Faith. It translates in English to "There is no God but Allah and Mohammad is the Prophet of Allah." The sword is a symbol of justice and represents Abdul Aziz ibn Saud who was the first Saudi King.

History: The current Saudi Arabian flag was adopted on March 15, 1973. The white sword was added to the flag in 1906 and there have been a few slight modifications to the flag, the latest being in 1973.

Interesting Facts: Arabic text reads from the right to the left. The Saudi Arabian national flag is only allowed for official purpose. The country's citizens are supposed to fly a plain green flag with a golden palm tree over two crossed swords in the upper right corner (source: worldflags101).