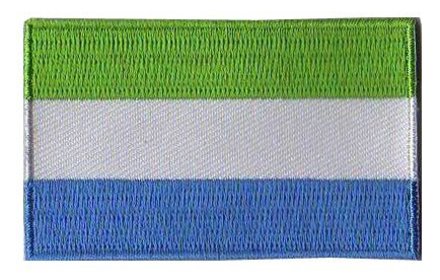 The flag of Sierra Leone consists of three equal sized horizontal stripes - the top stripe is green, the middle is white and the bottom stripe is blue.

Meaning: The green stripe represents agriculture, the country's natural wealth and its mountains. The white stripe stands for justice and unity, and blue represents the Atlantic Ocean and the harbor of Freetown, the country's capital.

History: The flag was adopted on April 27, 1961 when Sierra Leone gained independence from Britain. The name Sierra Leone translates to 'Lion Mountains' in Portuguese. Portuguese discoverers named the land in the 15th century after its mountainous regions. The Sierra Leone flag originates from the country's coat of arms.

Interesting Facts: From 1889 to 1961 the flag of Sierra Leone incorporated the British union Jack in it (source: worldflag101).