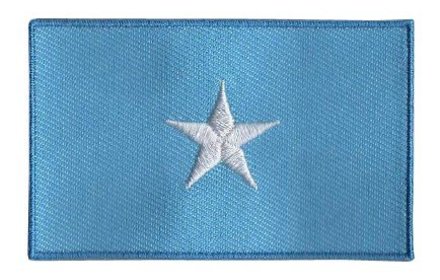 The flag of Somalia consists of a blue base with a white, five-pointed star in the middle of the flag.

Meaning:
The blue base originates from the flag of the United Nations and it represents the blue sky over Somalia and the UN, who helped the country realize its dream of independence. The white star represents African freedom. The star's individual points represent the five historical regions inhabited by the Somali people: Italian Somaliland (Somalia), British Somaliland (Somalia), French Somaliland (Djibouti), the Ogaden region of Ethiopia and north Kenya.

History:
The Somali flag was adopted on October 12, 1954 and it was inspired by the flag of the United Nations who had previously named the country as a trustee of Italy for 10 years. In 1960 Somalia gained independence and united with the former British Somaliland. The present day Somalia consists of the former Italian Somaliland and British Somaliland nations.

Interesting Facts:
Mr. Mohammed Awale Liban designed the Somali flag and presented it to the government in less than 24 hours. (source: worldflags101)