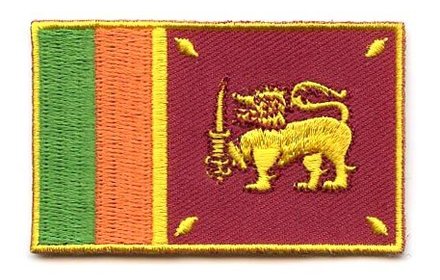 The flag of Sri Lanka consists of a yellow/orange base. A crimson colored rectangular section on the right side of the flag contains a yellow lion passant holding an upright sword and four yellow pipul leaves, one in each corner. On the left side of the flag there are two equal-sized vertical stripes, green and orange in color, that are also bordered by the flag's base.

Meaning: The green stripe represents Sri Lanka's minority Muslims and the orange stripe the minority Hindu Tamils. The yellow represents Buddhism and the crimson stands for a long life. The golden lion is an ancient symbol of the people and the sword is a symbol of authority. The pipul tree leaves are a Buddhist symbol and come from the tree, under which Gautama is said to have received enlightenment and become Buddha. Individually the leaves represent love, compassion, sympathy and equanimity.

History: The current Sri Lankan flag was adopted on September 7, 1978. Sri Lanka, gained independence from Britain on February 4, 1948 and changed its name from Ceylon in 1972. The Sri Lankan flag is called the Lion Flag, and has been used by the Sri Lankan people for centuries. The lion flag was used in 1948 and it was modified in 1951 the vertical stripes to represent the minority religious groups of the country. The leaves were added to the flag when the country changed names. The leaves were slightly modified in 1978.

Interesting Facts: The Sri Lankan flag is actually two flags in one. The Lion flag is shown in its entirety on the right side and the two colored stripes were added after the Hindu Tamils found the Lion Flag unacceptable (source: worldflags101).