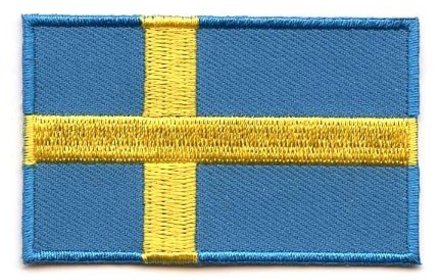 The flag of Sweden consists of a blue base with a yellow Scandinavian cross. The vertical stripe of the cross is off center. The design of the Swedish flag is likely based on the flag of Denmark; while the yellow and blue originate from the Swedish Coat of Arms which features three yellow crowns on a blue base. The cross, common to most Scandinavian flags, represents Sweden's link to other the Scandinavian countries.

The exact age of the Swedish Flag is unclear, but the oldest recorded images of a blue cloth with a yellow cross on it date back to the 16th century. The Swedish flag was officially readopted on 22-06-1906, which makes it one of the oldest flags in the world. In 1569 a royal warrant, issued by King John III of Sweden, stated that all Swedish battle flags should have a yellow cross on them. Sweden unified with Norway from 1814 to 1906 and placed an emblem representing the union in the upper left corner of their blue and yellow flag. The union dissolved in 1905 and the emblem was removed in 1906, resulting in the current flag.

Fact about the Swedish flag patch:

Swedish protocol states that a flag should not be used for anything else once it becomes unsuitable for flying. It should be burnt.