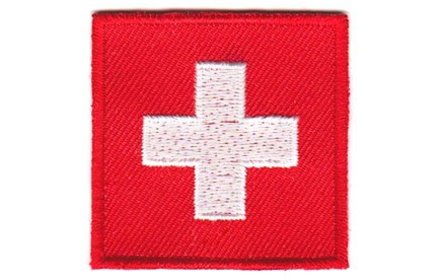 The flag of Switzerland consists of:

- A white cross in the center of a red squared background, which represents faith in Christianity

Freedom, fidelity and honors are the three keywords which the Swiss flag traditionally stands for. Nowadays, the Swiss flag has also come to represent pace, democracy, refuge and neutrality.

On 12-12-1889 the Swiss flag was adopted, which makes it one of the oldest flags of the world. The flag has its roots and status as a neutral country when European countries recognized Switzerland's independence from the Holy Roman Empire. In the late 14th century Swiss soldiers going into battle started wearing emblems that featured a white cross on a red base as a sign of their Christian faith and to distinguish themselves from their enemies. In 1814, a white cross on a red base appeared on the seal of the country and in 1848 the flag was adopted as the nation's military flag. It was then adopted as the national flag in 1889.

Facts about the Switzerland flag patch:

1. The flag of Switzerland is square shaped with its length being equal to the width.

2. To honor the nationality of the founder of the red cross, Swiss citizen Henri Dunant, in 1906 the humanitarian organization called the red cross reversed the colors of the Swiss flag to create the red cross flag.