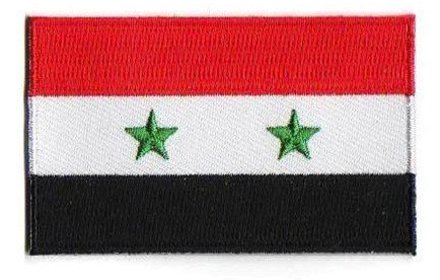 The first flag to be used by the Syrians, in 1920, was the current flag of Jordan with the green and white colors reversed. The colors and design were taken from the Pan-Arab flag and inspired by the flag of the Arab Revolt. The stars stand for the fact that Syria was the first country to use the Pan-Arab colors.

The French changed the flag of Syria under their mandate into a blue flag with a white crescent in the center and a French flag in the canton. After a month the flag was changed into a horizontally striped green-white-green flag with a French tricolor in the canton. This flag was in use from 1925 until 1936 (along with flags of several cantons into which Syria was divided under French colonial rule). Then the flag was changed into a horizontally striped green-white-black tricolour flag with three red five-pointed stars in the center of the white stripe. This followed the signing of the Franco-Syrian treaty which gave Syria partial independence. The first national flag of Syria after independence in 1946 was this green-white-black flag with three red stars.

In 1958, Syria and Egypt merged to form the United Arab Republic and adopted the red-white-black design with two green stars that is Syria's current flag. When Syria left the UAR in 1961 it briefly reverted to its old green-white-black flag.

However, the Ba'athist coup in 1963 led to a red-white-black flag with three green stars in the white band (the same flag used by Iraq at the time — rumors of a union between the two nations abounded).

In 1971, a red-white-black flag with a golden hawk in the white stripe was used as a flag for the Federation of Arab Republics which consisted of Syria, Egypt and Libya. The stars were removed from the flag and replaced by a golden hawk (the "Hawk of Qureish"), holding a scroll with the Arabic name of the Federation.

In 1980, the current red-white-black flag with two green stars in the white stripe was re-adopted. The change restored the top red stripe to the same red used in the United Arab Republic flag. The flag of 1972 had lightened the red color slightly.

Thus Syria has had six national flags (of four distinct designs) since independence in 1946 (source:Wikipedia).