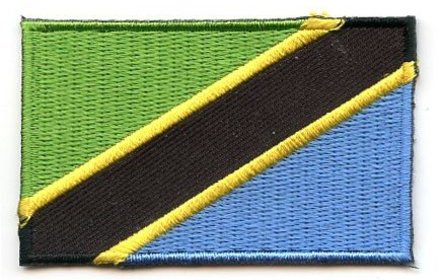 The flag of Tanzania consists of five diagonal stripes. The top stripe is green, the bottom is an equal-sized blue stripe, and the middle stripe is black with a thin yellow stripe above and below it.

Meaning: The green stripe symbolizes agriculture and the fertility of the land. The black represents the citizens of Tanzania. The blue stripe stands for the Indian Ocean which is on Tanzania's eastern coastline, and the yellow stripe represents the country's mineral wealth.

History: The Tanzanian flag was adopted on June 30, 1964. The Tanzanian flag originates from the flags of Tanganyika and Zanzibar, the two countries that merged together to form Tanzania in April 1964. Tanganyika's flag was green with a yellow edged black horizontal stripe centrally placed; while Zanzibar's flag was a horizontal striped tricolor of blue, black and green. Tanzania chose a diagonal design to show equal status to both flags.

Interesting Facts: Even though Zanzibar united with Tanganyika to form Tanzania in 1964, the island is planning to introduce its own flag before the end of 2004 (source: worldflags101). 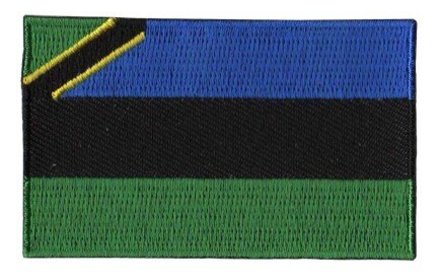