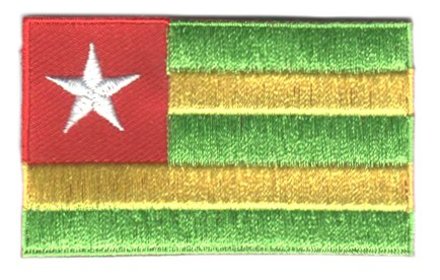 The flag of Togo consists of five equal width horizontal stripes. The top, middle and bottom stripe are green and the other two are yellow. In the top left corner there is a red square with a white five-point star in the middle of it.

Meaning: The red square symbolizes the loyalty and the patriotism of the people towards their country. The green represents hope, fertility and agriculture. Yellow stands for the country's mineral wealth and the faith that hard work and strength will bring prosperity. The white star represents life, purity, peace, dignity and Togo's independence. The five stripes represent the nation's five distinct geographical regions.

History: The Togo flag was adopted on April 27, 1960 when Togo gained independence from France. Togo's flag features the pan-African colors of red, yellow and green, which have been adopted by many African ex-colonies and which symbolize African independence and unity. The colors are believed to have originated from the flag of Ethiopia, the oldest independent nation in Africa.

Interesting Facts: Mr. Ahyi Paul, who was a student in France at the time, designed the Togo flag, which he entered in a 1958 flag competition. (source: worldflags101)