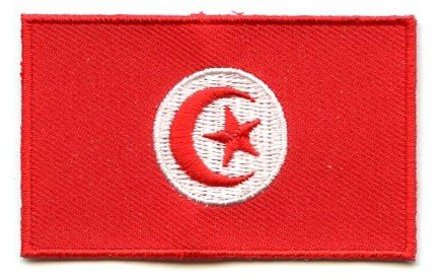 The flag of Tunisia consists of a red base with a white outline of a circle in the center. Inside the circle there is a red five pointed star which is based on a white circle and a red crescent.

Meaning: Red is a traditional color of Islam and was the color adopted by the Ottoman Empire who ruled Tunisia from late 16th century until 1881. It also came to represent resistance against Turkish supremacy. The crescent and star are traditional symbols of Islam and are also considered to be lucky symbols. The white circle represents the sun.

Interesting Facts: Even though Tunisia resisted against the Ottoman Empire and Turkish rule, the Tunisian flag is very similar to the Turkish flag (source: worldflags101).