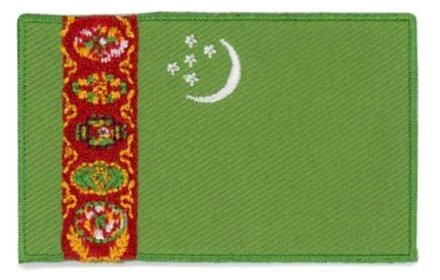 The flag of Turkmenistan consists of a green base with a vertical stripe on the left side that features five carpet designs above two olive branches. There is a white crescent moon and five white, five-point stars to the top right of the stripe.

Meaning: The art of Carpet weaving in Turkmenistan has been present for over a thousand years. Its importance is represented in the flag which incorporates five of the country's basic patterns (called 'guls' locally). In the mid-1990s Turkmenistan declared a policy of permanent neutrality and a pair of olive branches, like those on the United Nations flag, was added to the Turkmenistan flag to represent this. The green base represents Islam and the crescent symbolizes a bright future and hope. The five stars symbolize the five regions or Turkmenistan as well as the five human senses: hearing, sight, smell, taste and touch. The five carpet designs represent the traditions of the country and are a national symbol.

Interesting facts: When Turkmenistan was a part of the Soviet Union, its flags were all red based with soviet symbols on them (source: worldflags101).