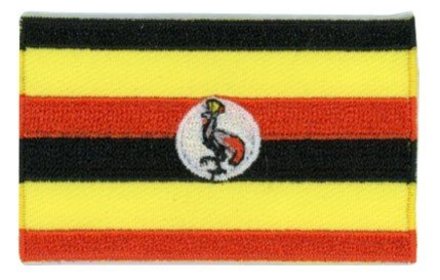 The flag of Uganda consists of six equal sized alternating stripes of black, yellow and red, starting at the top of the flag with black. In the center of the Ugandan flag there is a white circle with a crane (bird).

Meaning: The black stripes symbolize the African people. The yellow symbolizes the sun and the red stands for brotherhood and fraternity. The crested crane is a national symbol of Uganda - which was first used during British colonial times. Black, yellow and red were also the colors of the Uganda People's Congress party, who came to power in elections in April 1962.

History: The Ugandan flag was adopted on October 9, 1962, the day Uganda gained independence from Britain. A different flag was adopted by the ruling party as the national flag and was unofficially flown, but the Congress Party won the election and a new design - which was based on their colors - was adopted as the current national flag.

Interesting Facts: The Ugandan flag was designed by Uganda's minister of justice at the time, Mr. Grace Ibingira. It was the second of his two flag designs (source: worldflags101).