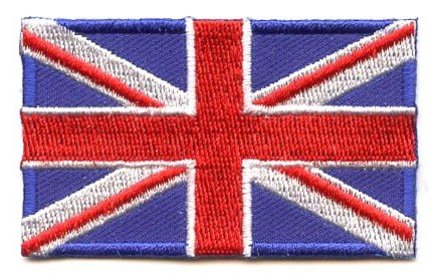 The flag of Great Britain represents the flags of three countries that are united under one Sovereign. It's a combination of their heraldic flags:

The first British flag combined the flags of the Kingdoms of both Scotland and England, which dates back to 1606. Wales doesn't appear on the flag, because in that time it was already united with England. In 01-01-1801 the Northern Ireland's flag was added, which makes it one of the oldest flags in the world.

1. This UK flag patch is one of the most recognizable flags in the world, because it's incorporated into the flags of former and other British colonies.
2. Another name for this flag is the Union Jack.
3. Union Jacks are also available in other color combinations, because the crosses of the flag are often used by soccer teams supporters. (source: worldflags101)