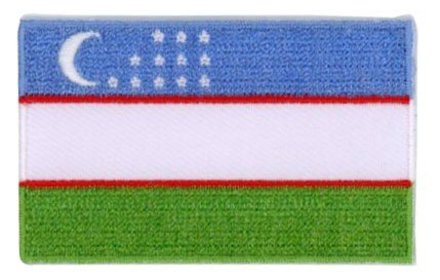 The flag of Uzbekistan consists of three equal-sized horizontal stripes. The top stripe is light blue, the middle stripe is white, and the bottom stripe is light green. The white stripe is bordered above and below it by a thin red stripe. On the left side of the blue stripe there is a white crescent moon and 12, white, five-point stars situated in horizontal rows of ascending order.

Meaning: The crescent symbolizes the independence of Uzbekistan and the historical traditions of the people. The 12 stars represent the historical culture of the country and relate to the 12 signs of the zodiac, which served as a basis for a solar calendar. The blue is historically linked to Uzbekistan and also represents the sky and water as one of the main sources of life. The white stands for peace and purity of ideals. Green represents nature, hope and new life and red represents life.

History: The Uzbekistan flag was adopted on November 18, 1991, just after Uzbekistan gained independence from the Soviet Union on September 1, 1991.

Interesting facts: Even though Uzbekistan is a predominantly Muslim country and the crescent is a symbol of Islam, the crescent moon on the Uzbekistan flag represents of the nation instead of its religion (source: worldflags101).