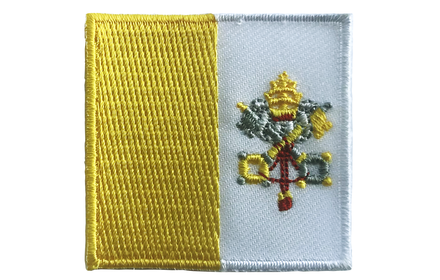 The flag of Vatican City consists of two vertical halves - the left side is yellow and the right side is white. In the middle of the white half is the crossed keys of Saint Peter and the papal miter.

History: The flag of Vatican City was introduced in 1825, but wasn't adopted until June 8, 1929, just after it gained independence from Italy on February 11, 1929. Vatican City-State is the smallest independent country in the world both in area and in population The Vatican is the home of the Pope and forms the territory of the Holy Sea; which is the central authority of the Roman Catholic Church.

Interesting facts: Although the Vatican City flag is often seen in various sizes, the official proportions are1:1, which makes the flag square in shape (source: worldflags101).