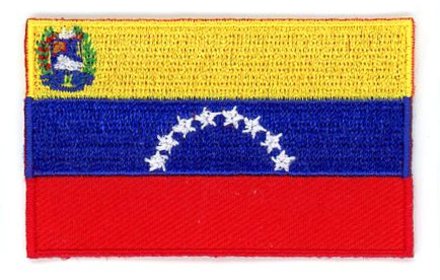 The flag of Venezuela consists of three equal sized horizontal stripes - the top stripe is yellow, the middle blue, and the bottom stripe is red. In the middle of the blue stripe and flag there are seven, white, five-pointed stars that are arranged in a semi circle. In the top left hand corner of the Venezuelan flag is the country's coat of arms.

Meaning: The Venezuelan flag is based on one flown by independence fighters fighting against Spanish colonial rule. At that time the yellow represented the gold of the Americas, blue stood for the Atlantic Ocean which separated the new Americas from the bloody old world of Europe and Spain which is signified by red. A modern but similar meaning behind the Venezuelan flag states that the yellow represents new opportunities, the red symbolizes Spain, and the blue stands for the Atlantic Ocean, which separates the two. The seven stars represent the seven provinces that existed at the time of Venezuelan independence.

History: The Venezuelan flag was adopted on February 19, 1954. Venezuela declared independence from Spain on July 5, 1811. After gaining independence the former Spanish colonies of Colombia, Ecuador, Panama and Venezuela formed a federation of states called Greater Colombia. This union used a horizontal striped flag (yellow, blue and red) based on a flag flown at the turn of the 19th century by Central American independence fighters. The current flags of Colombia, Ecuador and Venezuela are based on this flag. In 1829, Venezuela left the federation and adopted a yellow, blue, red horizontal flag. The basic design has remained the same with a few modifications. The last modification to the Venezuelan flag occurred in 1954, when the coat of arms was added.

Interesting Facts: There are many Venezuelan flags that do not have the coat of arms on them; this is the country's civil flag (source: worldflags101).