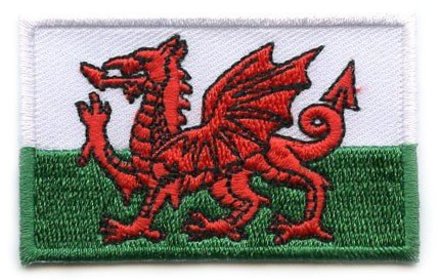 The flag of Wales consists of two horizontal halves - the top half is white and the bottom half is green. In the center of the Welsh flag is a red dragon. The exact representation of the dragon is not standardized and many different interpretations exist.

Meaning: There are many legends, rumors and myths about the Welsh flag and none of them are official. It is believed the red dragon represents ancient warriors.

History: The Welsh flag has been officially been recognized as the national flag of Wales since 1959, but the red dragon has been associated with Wales for hundreds of years. It is often claimed to be the oldest national flag still in use. The origin of the Welsh flag is now lost in history, rumors and myth, but a likely theory is that the Romans took the dragon emblem with them during their occupation of Britain, but it could be even older. The flag's green and white stripes were added by the House of Tudor, the Welsh dynasty that held the English throne from 1485 to 1603.

Interesting Facts: In Welsh the flag is called 'Y Ddraig Goch' which means 'the red dragon'. Wales was united with England in 1284. Therefore there is no separate Welsh representation on the British Union Jack flag, which represents England, Scotland, Wales and Northern Ireland (source: worldflags101).