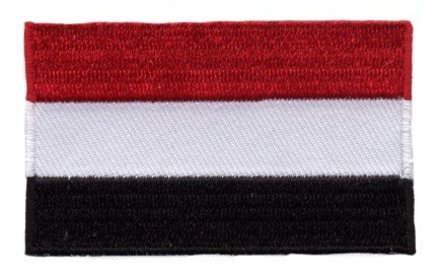 The flag of Yemen consists of three equal-sized horizontal stripes - the top stripe is red, the middle is white and the bottom stripe is black.

Meaning: Red, white, black and green are called the pan-Arab colors and have been historically linked to the Arab people and Islamic faith for centuries. The red stripe represents the blood shed during the country's struggle for independence. The white symbolizes hope for the future, and the black stripe represents an end to the country's dark past.

History: The Yemen flag was adopted on May 22, 1990 when North Yemen and South Yemen joined together. The red, white and black stripes were also present on the flags of North and South Yemen, and are traditional Arab colors. The Yemen flag is similar to the flag of the Arab Liberation Flag.

Interesting Facts: The basic designs of the flags of North Yemen and South Yemen were similar as they both had red, white and black horizontal stripes, but each flag had its own symbol added to it (source: worldflags101).