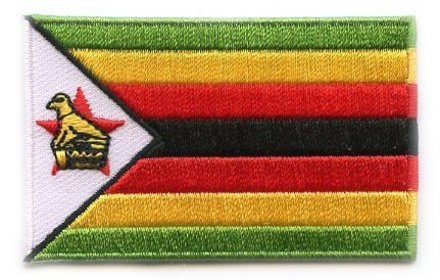 The flag of Zimbabwe consists of seven horizontal stripes of equal width. The middle stripe is black and there are stripes of red, green and yellow above and below the black stripe. On the left side of the Zimbabwe flag is a white horizontal triangle with a red, five-point star in it and on top of the star there is a yellow Great Zimbabwe bird.

Meaning: The red stripes represent the blood shed for independence; the yellow represents the country's mineral wealth; the green symbolizes Zimbabwe's agriculture and the land; the black stripe represents the African people; and the white stands for peace. The Great Zimbabwe bird is a national symbol and the red star behind the bird represents socialism.

History: The flag was adopted on April 18, 1980. Zimbabwe gained independence from Britain as Southern Rhodesia in 1965 and then gained independence from Rhodesia as Zimbabwe on April 17, 1980. The Zimbabwe flag incorporates the pan-African colors of red, yellow and green, which were carried by one of the nationalist groups fighting for Zimbabwe's independence. The pan-African colors are used by many African ex-colonies and stand for African independence and unity. It is believed the colors originated from the flag of Ethiopia, the oldest independent nation in Africa.

Interesting Facts: A law in Zimbabwe states that any person who burns, mutilates or otherwise insults the flag or shows it disrespect, shall be guilty of an offence and liable to a fine not exceeding one thousand dollars or to imprisonment for a period not exceeding two years (source: worldflags101).